The challenge of Non-Communicable Diseases (NCDS) in Ghana: do we stay silent and die in misery?

Home 2020 February 25 The challenge of Non-Communicable Diseases (NCDS) in Ghana: do we stay silent and die in misery? 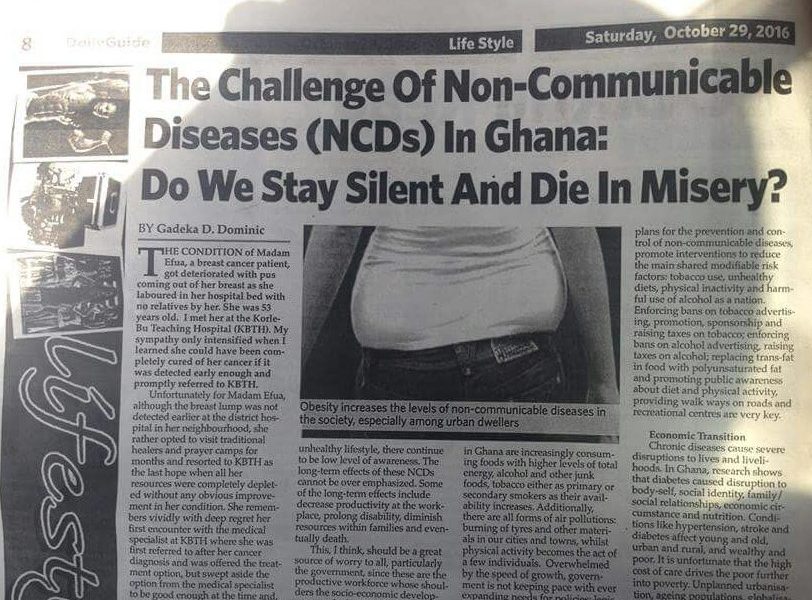 The challenge of Non-Communicable Diseases (NCDS) in Ghana: do we stay silent and die in misery?

Food is always viewed as an indispensable household necessity. It forms majority of our total expenditure. As the growing demand for food continues to escalate, fast food providers have proliferated both the metro and rural areas to help augment the need leading to the late night heavy, fatty and oily food consumption by both the old and young, the rich and the poor. “Eat late, sleep immediately and wake up early for work syndrome”, where eating any kind of food and alcoholic beverages have become the fashion in showing off one’s richness. Physical activity has been replaced by work stress so we can maintain our jobs in order to make ends meet in a challenging economy of our now middle income country.  Living in the now ‘filthy’ Ghana where everyone hopes for survival with all other living things, an era of all forms of pollution and rapid unplanned urbanization.

Hmm! maybe people are just ignorant. However, Kwabena’s death and Mad Efua’s agony and the lessons learnt can never depart from my mind as an individual. Non communicable diseases have turned their nerves on all ages. Kwabena was just 34 years of age but suffered from Congestive Cardiac Failure (CCF). Meanwhile CCF is considered a disease of the aged (60yrs and above). I met him at one of the health facilities in the country. I can still see him breathless, palpitating and gasping for air, our common commodity but could not lay hold on. Meanwhile Kwabena was just one among thousands.

Madam Efua, a breast cancer patient’s condition got deteriorated with pus and bad odors, laboring in her hospital bed with no relatives by her as the clock ticked. She was 53years old.  I met her at the Korle-Bu Teaching Hospital (KBTH). My sympathy only intensified when I learned she could have been completely cured of her cancer if it was detected early enough and promptly referred to KBTH.  Unfortunately  for madam Efua, although the breast lump was not detected  much early at the district hospital in her neighborhood, she rather opted to visit traditional healers and prayer camps for months and resorted to KBTH as the last hope when all her resources were completely depleted without any obvious improvement in her condition. She remembers vividly with deep regret, her first encounter with the medical specialist at KBTH where she was first referred to after her cancer diagnosis and was offered the treatment option but did not consider that option from the medical specialist to be good enough at the time and therefore abandoned it for traditional medicine.  This turned her joy into shame and guilt which negatively affected her sense of self and social identity. She could not help but echoed these words day and night, ‘this illness is like poison’; ‘this illness is like something rotting in the body and makes me uncomfortable’; ‘this illness has made me rejected, ignored, forsaken, unloved and has rendered me   stupid and dumb’….I become unhappy ’, she lamented. Notwithstanding all these agonies, she was able to tell me the great aspirations she was having before the disease set in.  This is how individuals and nation’s life and aspirations can be crippled due to ill health. What then are NCDS?

Non-communicable diseases (NCDs) are diseases that cannot be passed from person to person. These mainly include cardiovascular diseases (heart attacks, strokes etc), cancers, diabetes and chronic lung diseases. The occurrence of hypertension, diabetes, cervical cancer and prostate cancer in Ghana is increasing rapidly. It is not surprising that for example, the Ministry of Health in 2011 reported 48% of Ghanaian adults have hypertension and 9% have diabetes. Out of these hypertensives, only -up to 13% have well controlled blood pressure, while 70% are on no treatment and nearly half of them have target end organ damage. Complications of hypertension  resulting from low awareness  and much worse without appropriate treatment contribute to  87,000 (42% of all deaths) deaths in Ghana each year of which 20% of the victims die prematurely according to the World Health Organization –NCD progress monitor, 2015.  Increase in burden of NCDs could be due to modern behavioural risk factors: unhealthy diet, physical inactivity, harmful use of alcohol and tobacco smoking.   This is moreover currently compounded by the pervasive aspects of the country’s economic transition, rapid growth, rapid unplanned urbanization, ageing and inequitable distribution of resources. However despite the ever increasing rate of these unhealthy lifestyle, there continue to be low level of awareness. The long term effects of these NCDs cannot be over emphasized. Some of the long term effects include decrease productivity at the workplace, prolong disability, diminish resources within families and eventually death. This I think should be a great source of worry to all, particularly the government since these are the productive workforce whose shoulders the socio-economic development and advancement of the country rest.

What are the Risk Factors

As mentioned earlier, NCDs are caused, to a large extent by four behavioral risk factors:

Specifically however, Ghana’s NCD problems are being driven by economic transition, rapid unplanned urbanization and 21st-century lifestyles. It is moreover compounded by factors such as inadequate political commitment, insufficient engagement of non-health sectors, lack of resources and limited engagement of key stakeholders.

Notwithstanding this rapid growth and inequitable distribution, much of the human and social impact caused each year by NCD-related deaths could be averted through well-understood, cost-effective and feasible multisectoral  (involving all sectors) interventions. These include:

One of the major problems is the lack of public awareness about the diseases to accurately inform and educate and increase knowledge of Ghanaians NCDs, hence the need for healthy lifestyle. Awareness would also promote early detection as since it influences early health seeking behavior among even the apparently healthy.  However, there is no statistical evidence and experiences to launch a more forceful response to the growing threat posed by NCDs. Sedentary lifestyle and low educational attainment, psycho-social factors such as hostility and impatience, job strain, depression etc have each been linked to the rise in blood pressure.

It is expedient that there be an analytical approach, using regional and district-specific data to document the magnitude of the problem, project future trends, and assess the factors contributing to these trends. Early diagnosis based on awareness of early signs and symptoms and population-based structured screening will improve detection and survival, thereby reducing the severity and cost of illness and complications. It is therefore necessary that civil society institutions and groups mobilize political and public awareness and support for NCD prevention and control.

Adequate consumption of fruit and vegetables reduce the risk for NCDs. Most people consume much higher levels of salt than recommended by WHO for disease prevention. High salt consumption is an important determinant of high blood pressure and cardiovascular risk. High consumption of saturated fats and trans-fatty acids is linked to heart disease. Unhealthy diet is rising quickly in lower-resource areas. Majority of people in Ghana are increasingly consuming foods with higher levels of total energy, alcohol and other junk foods, tobacco either as primary or secondary smokers as their availability increases. Additionally, there are all forms of air pollutions: burning of tyres and other materials in our cities and towns whiles physical activity becomes the act of a few individuals.  Overwhelmed by the speed of growth, government is not keeping pace with ever expanding needs for policies; legislation, services and infrastructure that could help protect the citizens from NCDs.

There is low or lack of political commitment by all governments: no policies on salt, saturated fatty acids and trans-fats, advertising and promotion of alcoholic products, guidelines for management of major NCDs, structured screening and above all there are no national NCD targets and indicators. Although the national health insurance covers most of the major NCDs in Ghana, unfortunately, the NHIS does not cover screening of NCDs like cervical cancers, breast, diabetes etc., an  action which in itself defeats early detection of NCDs so as to improve treatment outcomes and also save cost for the country..

We need to establish and strengthen national policies and plans for the prevention and control of non-communicable diseases, promote interventions to reduce the main shared modifiable risk factors: tobacco use, unhealthy diets, physical inactivity and harmful use of alcohol as a nation. Enforcing bans on tobacco advertising, promotion, sponsorship and raising taxes on tobacco; enforcing bans on alcohol advertising, raising taxes on alcohol; replacing trans-fat in food with polyunsaturated fat and promoting public awareness about diet and physical activity, providing walk ways on roads and recreational centres are very key.

Chronic diseases cause severe disruptions to lives and livelihoods. In Ghana, research shows that “diabetes caused disruption to body-self, social identity, family/ social relationships, economic circumstance and nutrition”. Conditions like hypertension, stroke and diabetes affect young and old, urban and rural, and wealthy and poor. It is unfortunate, the high cost of care drives the poor further into poverty. Unplanned urbanization, ageing populations, globalization and weak health systems are implicated in chronic disease risk, morbidity and mortality. Financing and strengthening health systems to deliver the cost-effective individual interventions through a primary health-care approach is necessary in achieving the long-term vision of Ghana’s care coverage.

Strong health-care systems, including the information systems needed for reliable surveillance and monitoring, and the full engagement of non- health sectors, industry, civil society, and other partners, especially as the causes of these diseases lie beyond the direct control of public health authorities is much needed. It is therefore important target audiences: policy-makers, health officials, nongovernmental organizations, academia, relevant non-health sectors, development agencies and civil society collaborate to combat the NCD canker. The national NCD multisectorial steering committee must be strengthened to support NCDs interventions between various sectors in the country,

What individuals can do: